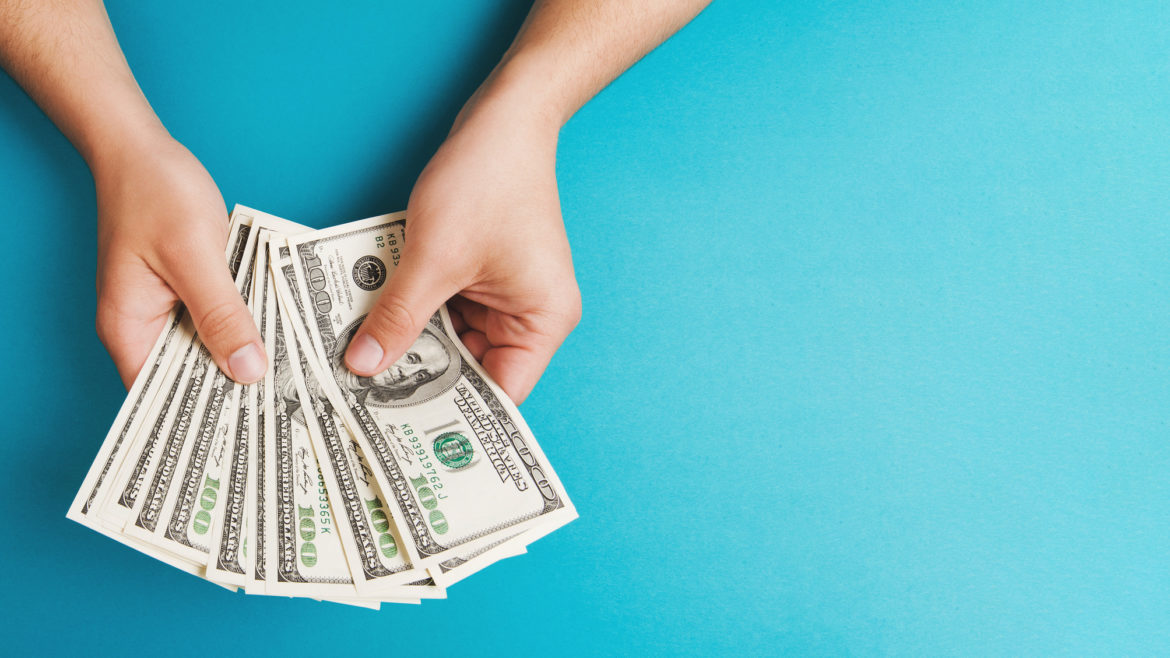 As credit unions navigate 2021, a $3.0 billion dollar question hangs over the cooperative system. Will the AME surpluses be returned in full, or will NCUA devise a way to hold back funds as it did when closing the TCCUSF in 2017?

The September 30, 2020, update on the five corporate AME’s shows a total of $3.035 billion in surplus. This would return the membership capital, a portion of paid in capital, and even a liquidating dividend for the credit union members of four of the five corporates. Only WesCorp members will receive nothing as that estate still reports a loss.

There are two kinds of payouts. The thousands of credit unions with membership capital in the former Members United, Southwest, and Constitution corporates should receive $572 million, $712 million and $36 million, respectively, according to the September data.

The balance remaining in the US Central estate after allocating $620 million to the four other AMEs is $1.065 billion. This should go to the eleven active corporates that will share according to their pro rata ownership of membership and paid in capital at US Central. These percentages are listed below in the column headed % USC MSC. 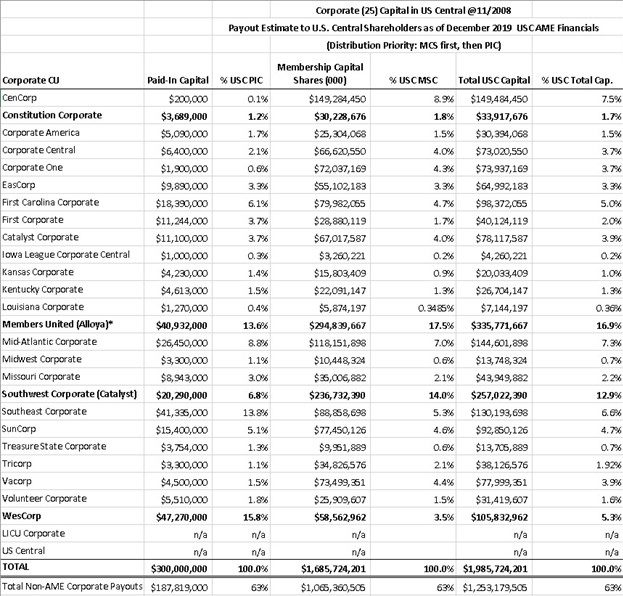 NCUA documented these obligations with receiver’s certificates sent to all credit unions upon liquidation. The agency reported an initial payment of $171.4 million to over 900 Southwest Corporate shareholders in July.

Will credit unions receive their money?

The distribution process seems simple enough. All NGN’s holders are paid off and the trusts wound up. The legacy assets are released, sold and the cash distributed. Except that is not NCUA’s traditional instinct.

When NCUA recommended closing the TCCUSF earlier than the 2021 final NGN maturity, credit unions were in favor, expecting a portion of their $5.0 billion in premiums to be returned years early. Instead NCUA “merged” the $3.1 billion into the NCUSIF, not returning the cash to credit unions.

Congress in establishing the TCCUSF in 2009 explicitly rejected this use of the funds: “These provisions are intended to ensure that the activities of the Fund are restricted to resolving problems in the corporate credit union system, and not used for other purposes, such as for dealing with natural person credit union problems.”

To merge and retain the funds, NCUA repudiated all previous analysis by raising the NOL above 1.3%, a distortion still practiced today. And it immediately expensed $650 million in the year’s final quarter to add to NCUSIF’s loss reserves—without explanation.

When NCUA closed the TCCUSF, it promised future “dividends” which were actually refunds of premiums paid. Credit unions received a $735 million “dividend” in 2018, and a second $160.1 M in 2019. However, NCUA still held onto at least $1.3 billion more in surplus by keeping the NOL at 1.38 versus the 1.3 cap in place for 35 years.

In closing the TCCUSF early, NCUA has returned only 29% ($895 million) of the TCCUSF surplus to credit unions. The Agency retained or spent the other 71%.

The innate bureaucratic reluctance to return credit union money is supported by some NCUA board members who openly advocate for more NCUSIF funding. Board Member Harper covets the FDIC’s flexibility, the freedom to assess and risk rate premiums, and its ability to set the NOL at whatever level the FDIC determines is necessary.

Harper’s statements show a misunderstanding of the NCUSIF’s unique financial model. Credit unions’ cooperative undertaking is to always maintain 1% of insured shares as a perpetual underwriting commitment. In return for this open-ended funding, credit unions, fearful that government would just spend these ever-flowing deposits, asked for and received statutory and operational guardrails on the fund’s management. These are the constraints that Harper now wants to undo.

As former NCUA Chairman Ed Callahan prophesized in NCUA’s 1984 Annual Report, “Don’t set it up and forget about it. It’s unique. It’s a better way. But just as important, it’s yours to monitor—because if you don’t it’ll go just like everything else government touches. When government gets more money, it wants to spend more. Our goal is to spend less. You have to hold us to that promise.” (How to Keep Your Insurance Fund Strong and Cost Effective, pg 18, NCUA 1984 Annual Report)

Start by asking the NCUA board to publish a plan for winding up the AMEs and distributing the cash. The audits will soon be done. There are no reasons to withhold any details of the remaining assets and their value.

Every credit union will benefit from this clarity and knowing there is a commitment to return the funds. The Corporate system will also gain additional capital to expand their services.

Already there are discrepancies between the latest AME numbers and the membership capital totals NCUA published. It is vital to NCUA’s credibility to produce its plan with full details. Another regulator described the importance of such action as follows:

“The essence of an effective deposit insurance system is the trust of the banking public in the operations of the deposit insurer. The only way to build trust is to make those operations transparent so that your stakeholders have the information and the means to hold you accountable. It is all about being accessible, understandable, and responsive to both regulated entities and those we seek to protect vis-à-vis deposit insurance.

“If you do not trust the system in which you live, you do not feel a part of it. It is not your government.” –Jelena McWilliams, Chair FDIC

When NCUA closed the TCCUSF in 2017 (ahead of the 2021 NGN final maturities) credit union’s expectation was an early return of their special premiums. But the Agency disavowed that hope by keeping all the money. Let’s ensure the money goes to where it belongs this time, all $3.0 billion plus.