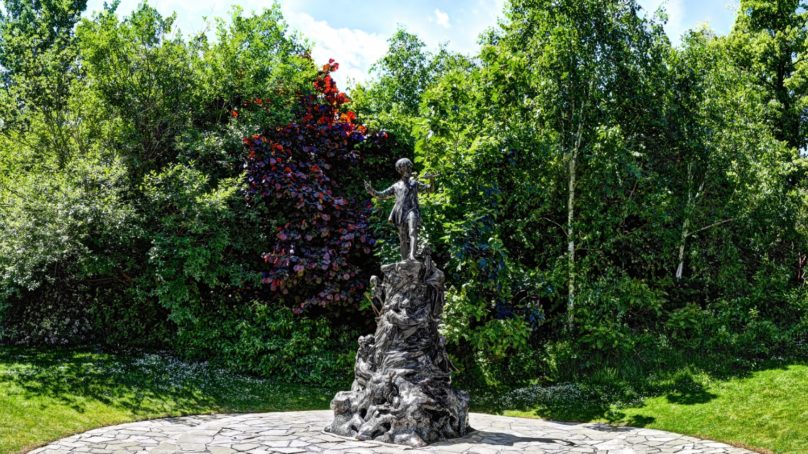 James Barrie’s children’s play Peter Pan has become a staple of holiday presentations since it was first staged in 1904 in London. Wendy, Tinker Bell, Peter, Captain Hook, Tiger Lily and the Lost Boys’ feats in Neverland are alive for those who have only seen the TV or movie versions.

The conflict between Captain Hook’s pirate band with Peter and the Lost Boys seems at times too real (walking the plank, if captured) and at other moments simply fantasy.

Peter Pan is the boy who doesn’t want to grow old. Tinker Bell’s pixie dust powers ordinary children to fly to the stars. And Captain Hook while trying to capture the Lost Boys, is always listening for the tick-tock of the alarm clock swallowed by the man-eating crocodile that bit off his hand.

Audiences both young and old are asked to imagine. Moreover, the play’s tension derives from the threats of mortality should the boys be captured, or what would happen if the crocodile sneaks up on Hook unawares.

Plays endure because they embody truths transcending the theatrical story. Who really wants to grow old? Has not a shadow of death crossed every person’s mind at some point? Does the lure of adventure, the dream of flying into the sky, ever end?

Do these theatrical insights have parallels with characters in credit union land?

I confess to seeing many Captain Hook figures in credit union land. They hear ticking clocks and spend their lives running from a vicious crocodile. They warn others to flee also. For it is their desire, similar to Hook’s, to subdue the optimism of Peter Pans, and to assert control over their part of credit union land. Here are some recent tick-tock warnings:

“In our industry there is such a short runway—we’re all going to face challenges. . . You have to be aggressive because there’s big changes in banking coming. You have got to get bigger and do it at a decent pace, and you have to look beyond your borders. If a credit union is anti-merger, they’re probably burying their head in the sand. The financial services industry is going to be facing some headwinds in the future and you have to be ready.”

A Board to its Membership:

Your FCU Board of Directors . . .has approved and is seeking a merger . . .It is the role of the board to look ahead and make decisions that we believe place our credit union in the best position to serve you. As we look to the future, we recognize the potential for economic challenges ahead. The last recession was very difficult for our credit union and we are not confident that we could remain well-capitalized through another economic downturn. We believe the time to take this step is now while our credit union remains financially strong.

“To me it’s always interesting to note the credit union community is now approaching $1.5 trillion in assets and we have an insurance fund with $16 billion, $17 billion in it. This is razor thin. There is not a lot of leeway here. (McWatters)

Harper called out the NCUA for tolerating “an uneven regulatory field. After the Great Recession, the FDIC and other banking regulators moved promptly to update and implement their risk-based capital standards, yet the NCUA wants to delay implementation for a second time. . . We know that a recession is coming. We just don’t know when and how severe it will be. That’s why we should fix the roof before it rains by implementing this (RBC) rule at the start of 2020.”

For Captain Hooks the end is around every corner. They preach negativity. It sounds expert, especially when facts don’t support their claims of future insight.

Like Peter Pan, credit union leaders have a different vision from the Captain Hooks of their responsibility. This is not a world where worries don’t exist; but rather one that believes in the radical, disruptive capabilities of cooperatives. Especially its focus on member well-being.

They know that the work of helping members is never ending and that hardships sooner or later come to one or all. But rather than looking for ways out of credit union land by giving up their charter, or outracing market growth, or emulating competitor’s models, or even hoarding more for future uncertainties, these leaders instead rely on one premise: how credit unions serve members will be the difference that sustains, whatever the economic or competitive climate.

Look for the many stories celebrating the sharing of credit union successes with members, communities and those in need. As the Hooks of the world continue predicting crises if one does not heed their ticking clock, recall the most dramatic moment in the play.

Tinker Bell appears to have succumbed in a fight with Hook and her spirit ended. Whereupon Peter appeals to the audience, breaking the theater’s fourth wall and asking “Do you believe in magic? Let me hear you.” And every time the audience shouts and claps, Tinker Bell recovers and the Lost Boys and Wendy make it home safely.

A lot of hard work goes into the cooperative model, but in the end, success depends on what you believe. The Captain Hooks? Or the many Peter Pans going about their work joyfully, knowing good works are never finished?