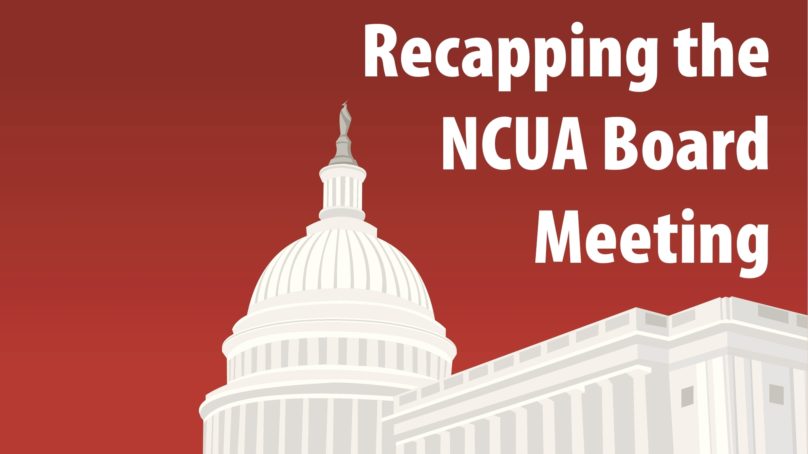 Recapping the May 2020 NCUA Board Meeting

Last week’s NCUA board meeting was offered to the public as an audio webcast only, but what I would have given to observe the usual video version! The review of the NCUSIF was normal enough as prepared by the “acting” CFO Eugene Schied, except for the feeling there was more to read between the lines of this report that required its own analysis and comment.

The second agenda item was a straightforward proposed rule on joint ownership rules and the growing use and need to accept electronic signatures on membership documents.

It was the third agenda item, an interim final rule concerning credit union overdraft policies, that highlighted the current state of board dysfunction. It wasn’t surprising that Board Member Todd Harper objected to both the process of using the interim exception for the final rule or the actual content and directives of the rule. Since joining the board, his most common modus operandi has been to give long-winded speeches about his objections to any and all proposals and ending up on the wrong side of a 2-1 vote. As a career bureaucrat, it’s not unusual to see this kind of self-serving promotion.

No, what really had me wishing I could see the usual Duke St. board room scene of the three board members and the back bench of the NCUA executive staff, were the comments from Board Member Mark McWatters that supported Harper and rebuked Chairman Rodney Hood. That was when the real fireworks began. This made for the extremely rare (maybe never???) 2-1 vote against the Chair.

What the hell just happened? Did Hood really not know that he was going to be torpedoed? Was his push for an interim final rule with no comment period and no sunset date really that egregious to his fellow board members? Why did Hood expose himself by using the interim rule process to push for a pandemic-based rule that could have garnered many a positive comment from credit unions, CUNA, NAFCU and consumer groups?

I think he let his anger with Harper get the best of him and forgot to engage the support of McWatters. This pandemic state has covered up many important news events and one occurred recently in our landscape. On April 30, Hood released a letter he sent to Sen. Crapo outlining the NCUA regulatory response to the pandemic. Five days later, Harper sent his own version of the regulatory response and needs, including vendor authority, to Crapo on NCUA stationary. His letter recapped a speech he had recently given the Northwest Credit Union Association.

This was a case of the minority opinion really overstepping the normal boundaries. Talk all you want about your personal positions and regulatory strategies anywhere and anytime you want, but when the Board speaks to Congress and the Chairman of the Senate Banking Committee, the agency speaks as one and only through the Chairman. We might not agree with that tradition, but I think that’s what Hood believes, and his overdraft proposal was his plan to reassert the Chairman’s authority.

One last observation is how the current personnel and leadership situation has likely compounded the situation. It can be described at best as a mess. Two, yes two, executive directors, a new deputy executive director, acting general counsel, acting CFO, and a new acting director of examinations & insurance. Who’s on first? The agency office politics and maneuvering are likely creating greater risk for credit unions than the pandemic.

Presenting the Right Message About Credit Unions in Today’s Crisis