Takeaways from the 2021 CU*Answers Leadership Conference

CU*Answers held its Annual Leadership Conference discussing the future of the industry and of CU*Answers as it moves forward into 2022. Check out the key takeaways from each section of the event!

CU*Answers held their 2021 Annual Leadership Conference and Stockholders Meeting on June 16th in downtown Grand Rapids, Michigan. The event brought together credit union leadership from across the country for a briefing on the organization’s overall direction and major projects for the coming year.

This year’s conference theme was “Experience, Energized, Engaged.” The event marked a return to the CUSO’s in-person festivities as last year’s event had moved digital in the wake of COVID-19. Said Karnes as he introduced the conference theme to the group, “The experience of COVID-19 will likely define a generation of business people who survived this trial, forever changed by balancing the goals of an industry and the plight of the customer-owners who define it. After we take stock of what it means to go on from here, I can’t imagine a generation more energized to engage communities of people, their dreams, and a future based on everyone’s success.”

Karnes suggested that by going through the event, we’ll all be able to add those experience to our résumés. “We have the energy to see it through, and we have the passion to inspire our entire industry. The party has started, and our party has just the right crowd of people to keep it going and make it a success for the next decade and beyond.”

The day-long conference was attended by 156 leaders from 69 credit unions, along with 42 representatives from 30 vendors and 47 internal staff. Other topics included, “Launching in 2021: A Decade of Evolution Ahead,” “When it comes to lending, where will CU*BASE focus in the next couple of years?,” and “Setting a target beyond your members might be exactly what your members need.” 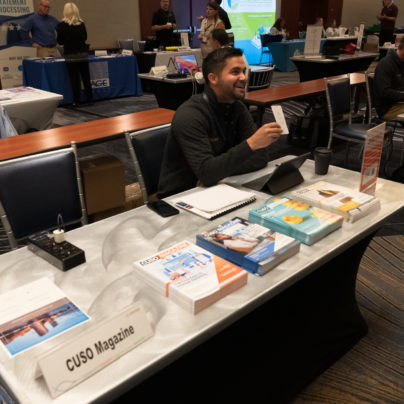 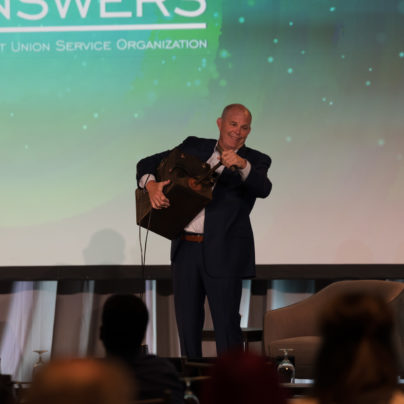 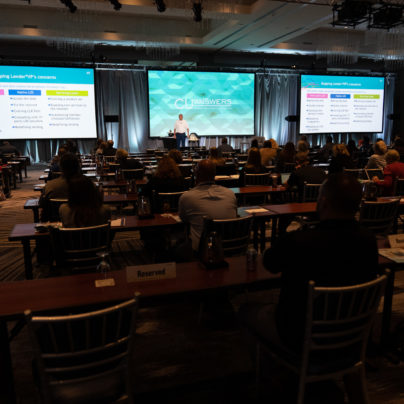 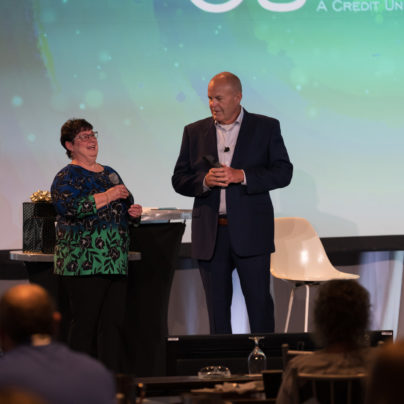 “I want you all to be as optimistic as I am. In a world of conflicting signals, our network need to be a constant in moving forward. As we talk today about the tactics and tonight about how we’ll sustain our efforts, leave COVID and doubt behind and feel confident about our network’s next steps.” – CEO Randy Karnes

During the first section of the event, Karnes spoke to the events of the last year and the momentum the industry can build on moving forward. “My entire career, I have assumed everyone was at the party, everyone was engaged, and everyone was just as excited as I was,” said Karnes. “But over the last fourteen months, I’ve never felt so much like a supervisor.” Karnes suggested leaving behind some of the practices that helped the CUSO and credit unions get through it as they look towards new possibilities. He summed it up with the theme of the event:

COVID-19 will likely define a generation of business people who survived this trial, forever changed by balancing the goals of an industry and the plight of the customer-owners who define it. We have the resumes to change it all.

After we take stock of what it means to go on from here, I can’t imagine a generation more energized to smell the roses and stay forever engaged in their community’s success. We have the energy to see it through.

After fourteen months of screen time, I can’t imagine a generation more ready to engage people, their dreams, and a future based on everyone’s success. We have the passion to inspire our entire industry.

The event proceeded with Debie Keesee, CEO of Spokane Media FCU, being honored with the Robert H. Mackay Leadership award. This year she will be completing her final term serving as the Secretary/Treasurer for the CU*NorthWest Board of Directors, a position she has held since 2005. Keesee has also served on the CUNA Board since 2016, on the National CU Foundation Board since 2018, and was the recipient of the Northwest Credit Union Association Lifetime Achievement Award in 2019.

When accepting the award, Keesee commented, “I am so fortunate to have done nothing but credit union work my entire career. The work our cooperatives have accomplished has allowed our credit unions to remain relevant in a way that is not duplicated anywhere else. I am thrilled to say that I was a big part of bringing that co-op to the credit unions in our area. I know without that collaboration my credit union would long ago have had to seek a merger partner.” Spokane Media Federal Credit Union currently serves 1,162 members and has $14 million in assets.

Karnes then welcomed the fifteen new peers to the CU*Answers family since the last Leadership Conference, as well as the thirty-five joining the network as part of the new CUaxis CUSO partner, a division of Vizo Financial. The new relationships bring the CU*BASE network up to a total of 347 credit unions in 42 states.

The section was wrapped up with 1st Community FCU CEO Bill Nikolauk being recognized for his contributions to the network with the Spirit of CU*Answers award. The award was given to Bill for his work in inspiring other credit unions with the credit union spirit, and whose work helped bring other credit unions into the cooperative CUSO. CU*Answers President/COO Geoff Johnson told the room of their first meeting roughly five years ago, “Even though he assured me at the time that he was not looking for a new core, after that first introduction and some due diligence, Bill’s credit union moved quickly to become a CU*Answers client and a very active partner-owner. Bill continues to be a strong supporter of the network and an activate participant in our growth in the Texas region.”

Nikolauk was also instrumental in introducing CU*Answers to last year’s winner of the Robert H. Mackay award, Drake Tanabe, CEO of Hawaii Central FCU. That credit union was CU*Answers’ first partner from the Hawaiian islands, a region where, like in Texas, the CU*Answers CUSO’s presence continues to grow.

Diving into development, Karnes first spent some time focusing on the major projects that have led the CUSO over the past few years: Mobile First and Xpress Teller.

Mobile First is a theme to change the CUSO’s future, from easily-identified internet solutions all the way to the lobby and lender desks. CU*Answers teams had been hard at work developing native APIs for online and mobile banking. “APIs were a difficult concept for credit unions to adopt,” said Karnes. “They wanted a function and were given the pieces to put it together. With modules, bundles of APIs can be handed over to give credit unions functionality, not parts.”

From these “modules,” development teams have begun creating a new family of desktop and mobile banking, with some credit unions already in beta for the new look and feel of It’s Me 247 Online Banking. Using their CU Publisher and Mobile Manager applications, CU*Answers teams can easily drag and drop to create new products—soon that ability to design will be put in the hands of credit unions too. 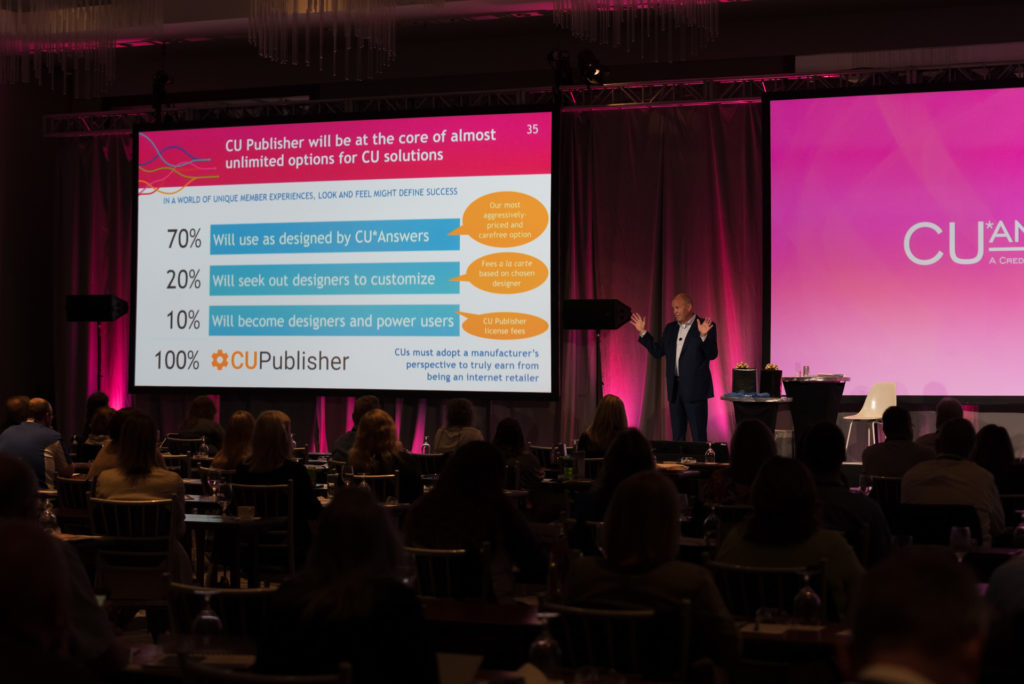 The vision of modules also launched new capability for delineating internet audiences: It’s Me 247 Online Banking for the member, MyBiz Personal Business Banking for the personal/small business owner, and BizLink 247 for larger businesses in need of more sophisticated functionality.

Karnes wrapped up the section with a recap of Xpress Teller’s launch and a look into what’s next: “Xpress Teller is more than just a new tool; it represents a whole new strategy for your front line.” Wanting to impress upon the group that Xpress Teller is not a replacement for the traditional soup-to-nuts solution within CU*BASE, Randy drove home the point that development of the two solutions is on two different racetracks.

The Next Spotlight Grabbers

Not to be outdone though, the CUSO has also made major investments into the native LOS, creating new solutions and products available today, including 1Click Credit Cards (soon extending to other loan types), CLR Path decision modeling, CD-secured instant loans, and smarter applications. Looking to set their processes apart from third parties’, CU*Answers has begun investing more aggressively in database lending solutions that move credit unions from being order takers to offer makers.

Initiatives for Your Radar

Last, but not least, Karnes gave a break down of some initiatives he feels should be on credit unions’ radar. This starts with the work AuditLink is doing in the area of auditing and compliance. VP of Professional Services Jim Vilker came on stage to give some of the highlights of the past year. With 112 daily log management, 25 abnormal activity monitoring, and 85 vendor management clients, the team has continued its fast growth.

The most exciting development is their race towards the golden ring of Stop-Go-No for fraud management. With new abnormal activity monitoring transaction patters in the most recent CU*BASE release, the team has been hard at work reviewing activity for beta credit unions, and has begun compiling data and studies to roll out a new monitoring service. The service will launch with the goal of catching illegal activity in the process to mitigate fraud such as money laundering, compromised card situations, P2P/RDC/ATM/PPP fraud, human trafficking, check kiting, elder abuse, and unemployment fraud.

Randy then dove into the work of Asterisk Intelligence, the data analytics division of CU*Answers. 2022 is expected to be a big year for AI, said Karnes, with the following initiatives coming down the pipeline: new team investments and outreach to markets; becoming a major vendor for every credit union board team; proof-of-concept for serving non-CU*BASE credit unions; and identifying & training new data analyst positions for credit unions and other CUSOs. These among many other solutions like AI Engaged, KPI Analysis, data warehouses, and Optics, will make the Asterisk Intelligence team one to watch in the near future. Lastly, Karnes congratulated the team for winning the 2021 Tearsheet data award for best customer data implementation in conjunction with Payveris. 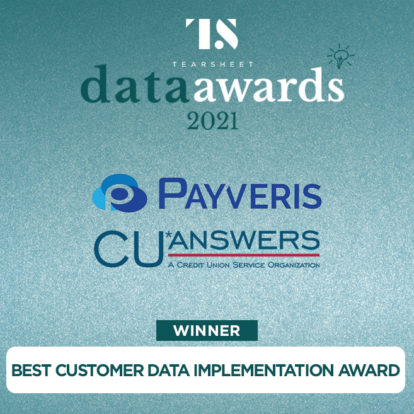 As Karnes wrapped up the day’s events, he invited the CU*Answers staff in attendance to join him on stage, tipping his hat to them for their daily contributions pushing the organization forward. “It may have been a bit of a one-man show on stage today, but nothing we do could be possible without the many leaders standing here in front of you. Next year will look different. It’ll be a new party, but one no less exciting or brimming with enthusiasm for our organization, industry, and the owners we serve. Thank you.”

What Makes Our Industry Unique: Stories from Leaders