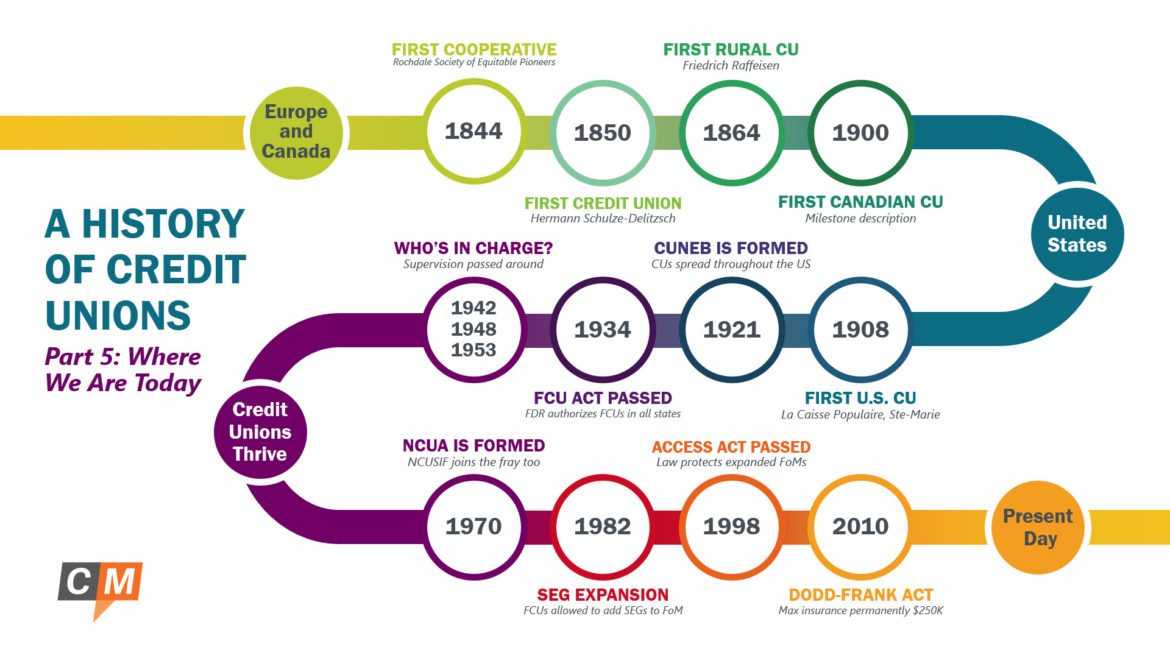 A History of Credit Unions Part 5: Where We Are Today

Here we are in the final week of this CUSO Magazine series and what a long, strange journey it’s been. In the last article, I detailed the formation of the NCUA in 1970 and the subsequent policy changes that would make it easier for credit unions to reach new segments of their communities. These changes however did not go unnoticed… the banking industry had become increasingly threatened by credit unions who could now reach new audiences without the need to start a new charter.

With credit union membership and assets growing quickly, banks turned their attention to the legality of the NCUA’s decision to allow select employee groups. In National Credit Union Administration v. First National Bank & Trust Co., the banks argued that since the 1934 FCU Act stated that federal credit union membership was limited to “groups having a common bond of occupation or association, or to groups within a well-defined neighborhood, community or rural district,” allowing SEGs was in violation of that Act.

Since charters were meant to be designated as serving a single employer (or association or community), by allowing SEGs, credit unions could greatly expand the number of people they could serve. The courts ended up ruling in favor of First National Bank, meaning that credit union membership would be restricted for each credit union to only that common bond as detailed in the charter.

Concerned about the resulting impact this would have on existing credit unions and their membership, the court delayed any action on the ruling, allowing the NCUA to seek legislation to address the issue.

To prevent the possible outcome of forcing out millions of credit union members, credit unions and Congress worked quickly to draft legislation. H.R. 1151 of the 105th Congress was voted on by the House on April 1, 1998 and included four major amendments to the 1934 Federal Credit Union Act:

The core reason for the Act, this section amended the FCU Act to “add multiple common bond credit unions to the current permissible categories of single common bond and community credit unions.” The section also protected existing members and groups that would have been forced out, and included limitations and provisions for what kinds of groups could join an existing charter.

This section added more rules on how credit unions should be operated from a financial and oversight standpoint, requiring a higher standard of accounting principles and annual audits for credit unions over $500 million. It also placed limits on the amount of member business loans that credit unions can make.

Title III: Capitalization and Net Worth of Credit Unions

Protecting the National Credit Union Share Insurance Fund was the name of the game here. This section added more oversight for net worth and prompt correct action, and more.

Finally, this section called for reports on the implementation and effects of the changes, among other things.

2008 saw the greatest financial crisis the world had suffered since the Great Depression in the 1930s. Banks suffered considerably, and while credit unions would also suffer, the impact on the industry was relatively small compared with their larger counterparts.

To protect members, share insurance was temporarily increased from $100K to $250K in 2008. Then, as part of the Dodd-Frank Wall Street Reform and Consumer Protection Act of 2010, a response to the crisis that made large, sweeping changes to financial regulation, that share insurance amount was made permanent.

In the wake of the crisis, disgruntled and disillusioned Americans flocked to credit unions which had suffered far less. The non-for-profit and cooperative nature of the industry appealed to a population frustrated with Wall Street. Activists organized Bank Transfer Day on November 5, 2011 encouraging people to move their funds and business to credit unions. An estimated 440,000 new memberships and $4.5 billion in funds were moved over.

Credit unions have a long and storied past filled with a passion for serving their communities. More than 100 years after the first credit union in America opened its doors, credit unions are still going strong, but are not without their own challenges. Although members and total assets are at an all time high, consolidation and emerging competition continue to threaten the industry. All the same, the passion for the industry is as high as ever–where there’s a need for financial services, there are those willing to help, and that’s where credit unions will continue to best serve.

Whew! I hope you enjoyed this history of credit union series. If there’s some major milestone that you felt was missed, let me know in the comments.