CU*Answers held its Annual Leadership Conference discussing the future of the industry and of CU*Answers as it moves forward into 2023. Check out the key takeaways from each section of the event!

CU*Answers held its 2022 Annual Leadership Conference and Stockholders Meeting on June 15th in downtown Grand Rapids, Michigan. The event brought together credit union leadership from across the country for a briefing on the organization’s overall direction and major projects for the coming year.

This year’s conference theme was “Our Next Adventure.” The event marked the first hosted by Geoff Johnson, who has served as the organization’s CEO since October 2021. “The last eight months since I became CEO have just flown by. It’s been an exhilarating adventure already.”

He thanked everyone for the support he has received along the way, saying, “although there’s a new face, a new style, and you’ll be hearing from some different voices, it’s the same great team, the same outstanding group of clients and owners, and our CUSO is in the same great financial shape as before.” The word of the day, said Johnson, was evolution. “Our next adventure simply means our CUSO is continuing to evolve, continuing to serve our clients and owners, and continuing to be a force in the industry. We’re rarin’ to go!”

The day-long conference was attended by 147 leaders from 112 credit unions, along with 43 representatives from 25 vendors and 25 internal staff. Joining Johnson on stage were leaders and experts from AdvantageCIO, Network Services, Asterisk Intelligence, AuditLink, and more, as they discussed the latest and greatest in the CUSO’s software and product development. 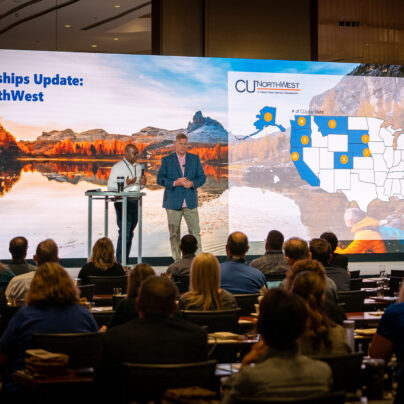 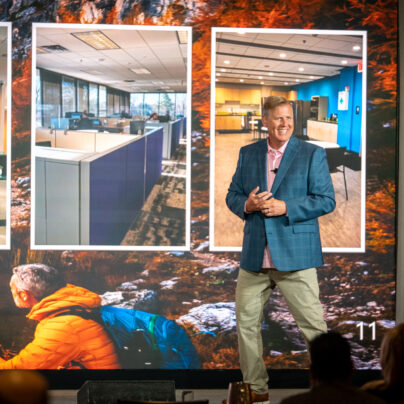 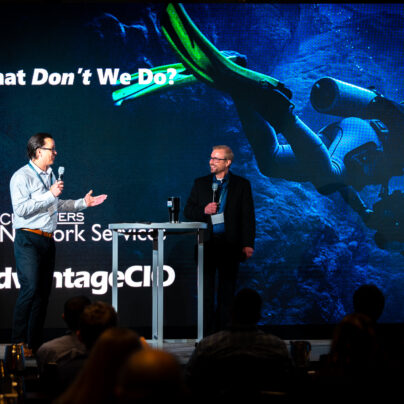 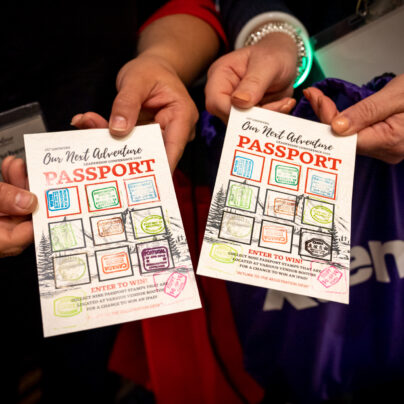 “We look forward to some very exciting things to come in the years ahead as we continue on our next great adventure as a cooperative and partner.” – CEO Geoff Johnson

Big Picture Strategies for the CUSO

During the first section of the event, Geoff gave a run down on the state of the CUSO and of its growing number of network partners. Over the course of the last year, CU*Answers conversions teams worked to move 28 new clients to the CU*BASE platform, far exceeding any previous year total. A big part of that was CUaxis, a division of Vizo Financial, the newest Certified CU*BASE Distributor.

In recognition of their hard work to bring clients onto the platform, Vizo Financial was given the “Spirit of CU*Answers” Award, which was presented to Charnell Etzweiler, Core Implementation & Support Director for Vizo.

Etzweiler and her team worked in tandem with CU*Answers over an 18-month span to convert 34 credit unions from a core previously supported by Vizo to CU*BASE, as well as to merge two credit unions into an existing CU*BASE client. Said Johnson, “This was a record-breaking number of projects completed in a year, and we could not have done it without the tireless work and creative input from both the Vizo and CU*Answers teams. We are already seeing great things from the partnership.” 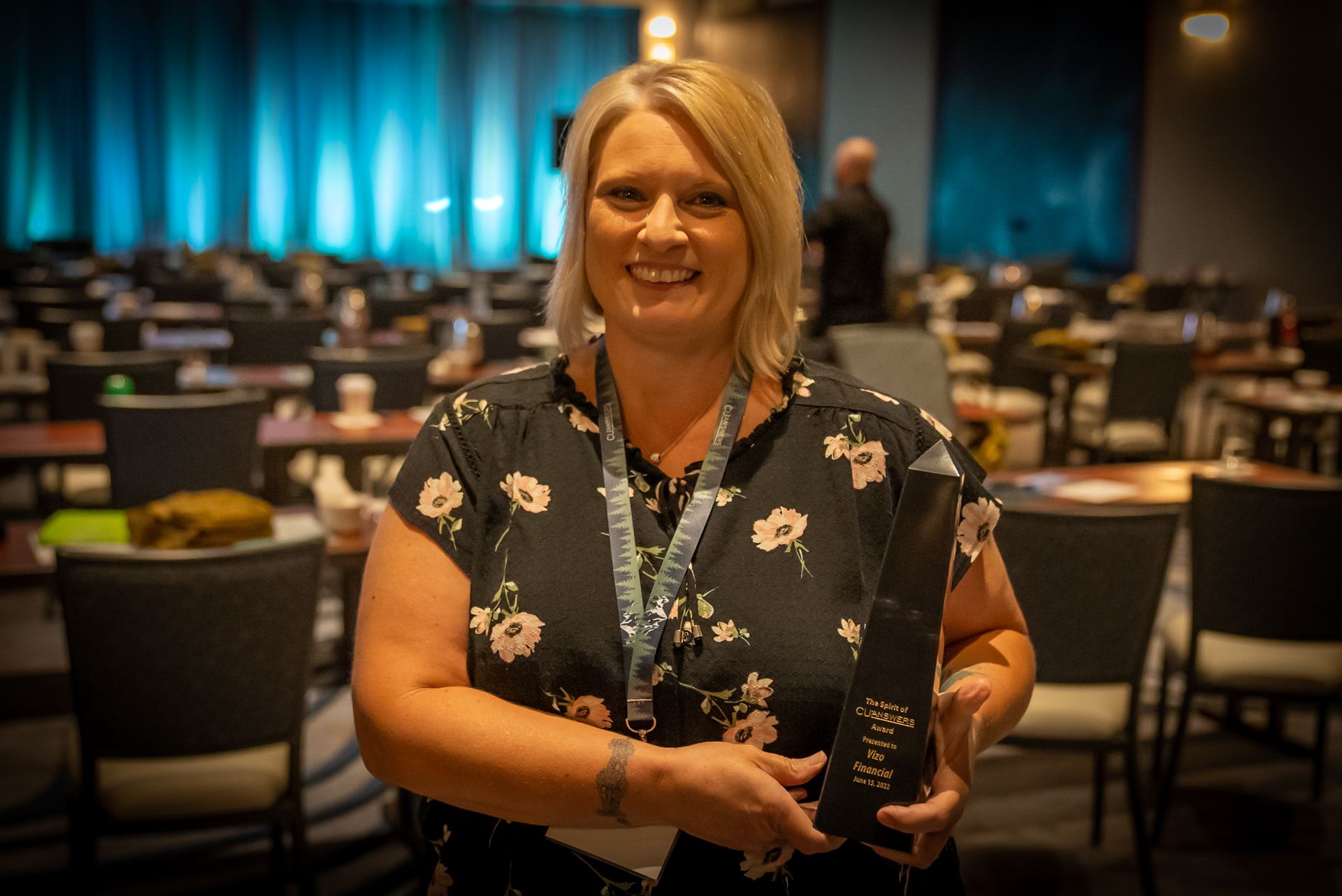 As she accepted the award, Etzweiler addressed the crowd, saying, “I’m honored to accept this award on behalf of Vizo Financial. We appreciate all the hard work of the many CU*Answers teams we’ve had the privilege of working with over the last 18 months. You all are amazing. We value our partnership with CU*Answers and look forward to continuing to strengthen our partnership well into the future. Thank you.”

Geoff then gave the stage over to introduce the newest CEOs to the cuasterisk.com network: Larry Hayes of CU*NorthWest and Robert West of CU*SOUTH. As the day pressed forward, big picture strategies were touched on including new servers, PCI compliance, how Servicer Edition is evolving, and new partnerships like Payrailz and Member Access Processing.

A Look at Cybersecurity, Multi-Factor Authentication, and More

As Johnson began introducing team leaders on stage, seven individuals were given a mic to share what they are working on for the network. First among those were EVP Dave Wordhouse and VP Matt Sawtell who came up to discuss cybersecurity as representatives of AdvantageCIO and CU*Answers Network Services.

Among the messages that stood out was their lesson to credit unions of employing ATM: Act, Teach, Messaging. Cyber events are a constant threat to credit unions. But by employing the ATM method, credit unions can mitigate the risks posed by acting quickly, teaching staff how to recognize risk vectors, and controlling the messaging to members when an event does occur. Wordhouse warned not to let good intentions turn a bad situation worse, urging patience in sharing what and when. As the duo wrapped up, they announced they would be giving away a free ransomware and separate free cybersecurity assessment.

Next up was VP Dawn Moore, who came on stage to discuss multi-factor authentication (MFA) and how expectations have changed over the years. It used to just be that MFA was desired for online banking–now credit unions and examiners are looking for it everywhere. Moore explained that MFA development is in the design phase with vendors such as Daon, but reiterated CU*Answers’ philosophy of “we make the tools, you make the rules.” In other words, although multi-factor authentication is sure to come, it will be up to credit unions to decide if and what they choose to implement.

Moore tagged on that MACO (CU*Answers’ Multiple Authentication Convenience Options tool that gives members access to their accounts via a mobile app) would be coming to the online membership opening process. Individuals will be able to take a selfie when opening a membership, upload a photo of their ID, and have the system not only confirm their identity, but bring that photo ID directly into the credit union’s image vault for record retention.

AuditLink’s Jim Vilker and Marvin Johnson then joined Geoff on stage for an update on the world of audit and compliance. Marvin was eager to remind clients of the developments to CU*BASE’s abnormal activity monitoring toolset, which has seen significant expansion over the last year. Credit unions have immediate access to thirty pre-loaded patterns meant to detect structured activity, but have it within their power to create new patterns that may be specific to their members. Early detection though is the hot topic. As AuditLink looks forward, it is investing resources into their “Stop, No-Go” initiative meant to prevent fraudulent behavior before it can become an issue.

As Geoff wrapped up the morning, he reflected on how he started at CU*Answers eighteen years ago, and how excited he was back then to have been given the opportunity to work for the cooperative. It was his great honor then to award the “Robert H. Mackay” Award to the individual who had given him that opportunity, Randy Karnes. 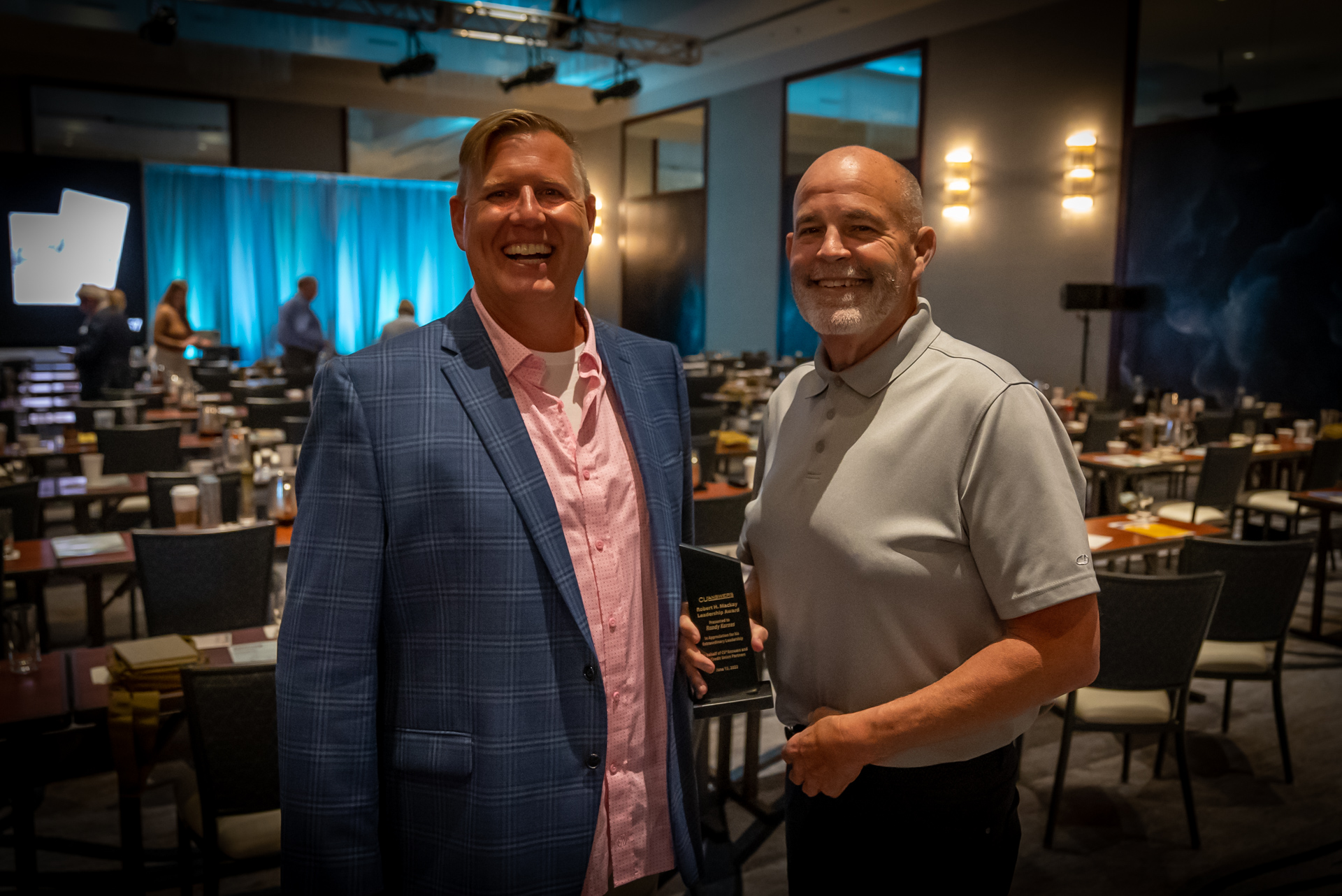 Karnes served as the CEO of CU*Answers from 1994 to 2021 and will be retiring at the end of September 2022. “I sincerely appreciate this award, just as I appreciated Bob MacKay,” said Karnes. “Bob’s talent to inspire cooperative action stood out—not as words, but through his respect for others and his efforts to support community efforts. He was always at the middle of getting things done.”

Karnes exhorted credit unions to do something big this year. “Our communities are forever challenged and that is still our call to action. Cooperative ownership shines in times of stress and diverse pressure. Now is the time for CUSO and credit union leaders to focus on providing solutions. Looking forward, I’m confident about the response of the CU*Answers credit union community, and the power of cooperative owners to lead the way.”

The Next Spotlight Grabbers

Following lunch, attendees were given a glimpse into Lender*VP’s newest initiatives by Dawn Moore who returned to the stage. Chief among those is FUEL, short for Forecasted Underwritten Express Lending, a way for a member to apply, get a yes, sign, and get their funds. The CUSO is also working on a couple projects to enhance the online loan origination system. Project #1 focuses on managing the loan queue by routing incomplete apps to a new area for MSR and loan officers to follow up on. Project #2 is aimed at a new online loan application for both members and non-members, with customization options at the fingertips of credit unions through CU*Publisher. And project #3 takes a look at online approvals and fulfillment (see FUEL above).

After an update on mobile app development and the new publishing schedule, VP of Client Interactions Heather French came on stage to discuss the evolution of EFT over the last year. Mandates from card networks present a major challenge for the CUSO, but they’re also something credit unions need to pay attention to themselves! French urged credit unions to keep an eye out for report changes from their vendor that might affect how they conduct their business. Heather also encouraged credit unions to take advantage of the free card randomization service aimed at preventing brute force BIN attacks, a threat on the rise.

Heather wrapped up her time by talking about a crowd pleaser, digital card issuance (DCI). This will be a major initiative involving six different projects working in concert: card requests, real-time card add, show card credentials, card reorders via online banking, DCI for 1Click Offers, and push provisioning. She was also excited to indicate that digital card issuance will be attached to 1Click Offers, CU*Answers’ online banking solution giving pre-approved loans to members that are quickly accepted and provisioned. By adding DCI, members will not only be able to get that credit card account quickly, but also have the card added to their digital wallet right away!

A quick intermission was taken for Geoff to do a live take of his newest Two for Tuesday. He reflected on the initiative he undertook as a new CEO looking to reach out to his clients and owners, wanting to share his two highlights for each week. He opined how he’s not one for long emails, and so Two for Tuesday was born. To date, the program has been a great success with traffic spiking each Tuesday on the CU*Answers website. 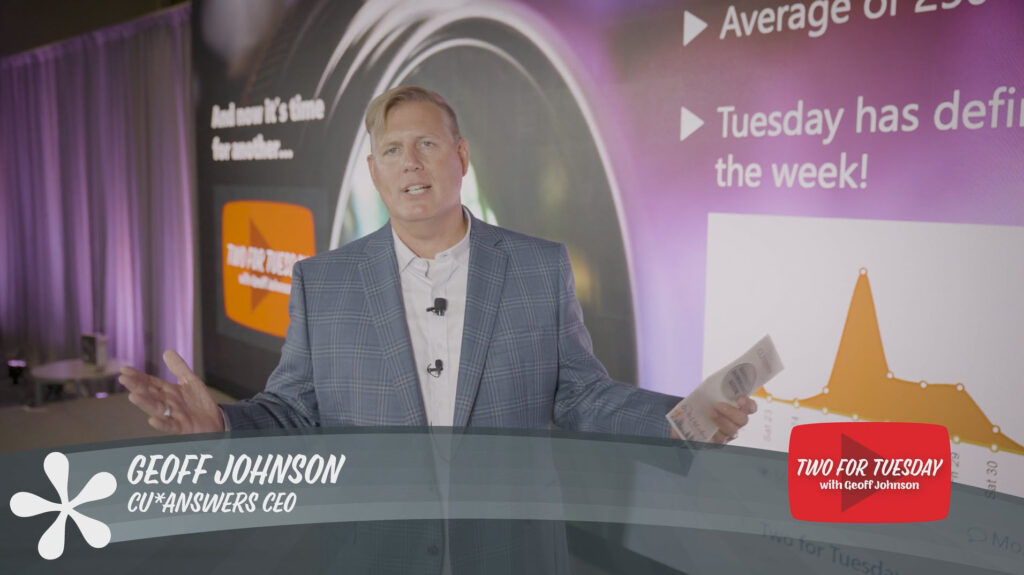 VPs Ken Vaughn and Dawn Moore were back on stage as the final status update of the day to talk about user design, starting with a history of how CU*Answers handles UI design in CU*BASE and on the web. Dawn, who has worked with CU*Answers for over twenty years, shared how the arrival of Ken and his team and their new way of looking at software design forced her to rethink how CU*BASE is developed, which has been a boon to clients. That will inevitably lead to the next evolution of CU*BASE: bringing it to the web. Research is currently being done on getting a loan application working in a web interface, but Moore indicated this was just the beginning.

Wrapping Up the Day

Dawn Moore was introduced as the newest member of the Executive Council as an Executive Vice President. And Scott Page joined the stage as he was honored for his many years of service at CU*Answers as he approaches retirement.

As Geoff closed the festivities he shared, “I’m excited about the course we’re on. I’ve never been more enthusiastic about what collaboration can mean for every single person in this room!”