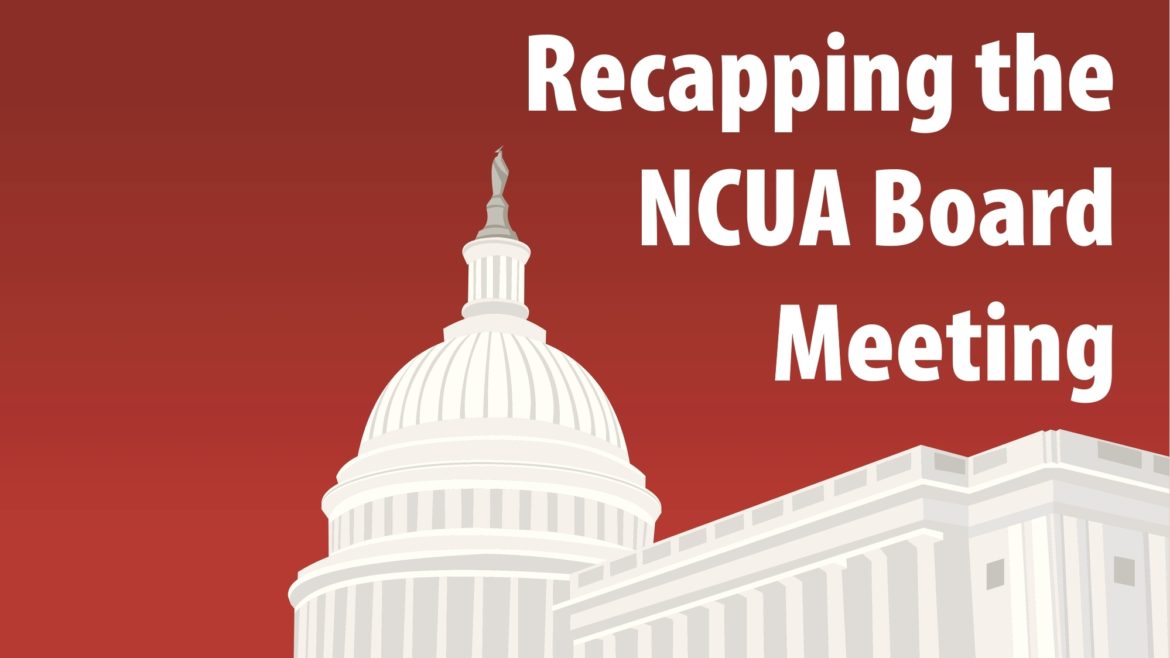 Recapping the June NCUA Board Meeting

I know that most of you readers make sure that the web broadcast of the monthly NCUA board meeting is on your calendar… so you will know of what I speak! In advance of the upcoming July board meeting, we’ll be recapping the last board meeting in a new series in which I dive into what came out of Duke Street.

The camera in the NCUA building never seems to scan any scene other than the Board members and those staff members making a report across the table from them. Why no view of the audience? Most often it would show 30-40 empty seats, occasionally occupied by NCUA staff members dependent on specific agenda items. Of course, why make the trip? No questions from the audience are allowed and God forbid if you were to ever see a chat option if you are watching the live web broadcast. Talk about a wasted exercise in meeting the minimum requirements of sunshine laws for federal agencies.

There have been many months when the official business of a regulatory agency responsible for a $16B insurance fund over 2,500 federally chartered financial institutions is completed in 30 minutes or less. Shame on us for letting them get away with this practice. Shame on us for not insisting that an agency responsible for the oversight of one on the world’s largest cooperative networks exercise the best practices of communication and participation that we expect of ourselves in working with our owners. Can we fix this? Where do we start? What small steps can I do?

To start with, this monthly blog will give you the highlights of the most recent board meetings as I see them. Yes, for those of you who have real jobs, I will watch some of the most gripping video, not seen on HBO or YouTube. Hopefully I’ll be able to get you more interested in what’s happening to your members’ capital when it goes off to Alexandria. Maybe what I reflect on will make you mad — sometimes with NCUA and sometimes with me. Let me know how you’re thinking and if I can do a better job of being an activist on your behalf and on behalf of all of us credit union owners. Because sometimes, even in a short meeting, they are making decisions for which we’ll have to deal with the actual and unintended consequences.

Observations from the June 20 meeting

Well, RBC was delayed again when it should have been totally trashed, to never again see the light of day. Too bad the Board and most importantly the staff weren’t in the room for the CU*Answers Leadership Conference to hear what Randy Karnes, Chip Filson, and Ed Callahan had to say. Maddening that Harper and staff still justify even the consideration of RBC because “we’re behind the other banking agencies.” Yeah, let’s continue to erode our uniqueness by implementing a policy that even bankers acknowledge to be proven unnecessary.

Remember, risk-based formulas were a knee jerk reaction to the economic crisis of 2008 and 2009. Being credit unions, most of us would have never even heard of Basel, not knowing if it’s a cream pastry or an over-priced city in a country that is neutral on all things except making money and keeping secrets. As Chip reminded us in his blog written back in April 2016: “Basel was never intended to apply to credit unions.”

In addition to this misapplication of Basel, there is increasing consensus that RBC is too complex to understand, and at its worst, does not work at all for banks. On April 12, 2016, following the issuance of the Basel’s annual Global Capital Index comparing capital levels of the world’s major international banks using risk-based formulas, FDIC Vice-chairman Thomas Hoenig has this assessment:

“This international risk-based measure is misleading and overstates the strength of these firms’ balance sheets. No other industry is allowed to make these kinds of (asset-weighting) adjustments. In contrast to risk-based calculations, the tangible leverage ratio accurately measures bank risk and prices it correctly. It has done a reliable job of aligning a firm’s risk appetite with its loss-absorbing capacity, providing more direct insight into the amount of loss-absorbing capital available to a firm and providing a consistent and comparable measure across firms.”

As Chip would go on to say: “The 7% net worth standard is the equivalent of Hoening’s tangible leverage ratio. It has worked successfully for more than 100 years in the cooperative system.”

Why is the board wasting their time, the staff’s time and our money continuing to study a flawed and disproved capital measure? It certainly seemed like theater to me while Board Member Harper ranted for an hour about how he can’t believe RBC hasn’t been implemented and how much risk this exposes the fund to. Sounds more like he’s defending the stupidity of his old boss, Debbie Matz, and perhaps his own role in devising this scheme back when first presented.

Too bad that Hood and McWatters didn’t have the guts to vote 2-1 to just kill it. Well, it should keep a few more staff employed as the study continues, all of which we’re paying for.